The other night while on a tour of the West Wing, we stopped in the press room. The lights were on, just as if an actual press conference were taking place. Standing by the press secretary's podium I looked out at where the cameras usually are and glanced down at the seats with nameplates saying "Helen Thomas" and "Reuters."
I indulg 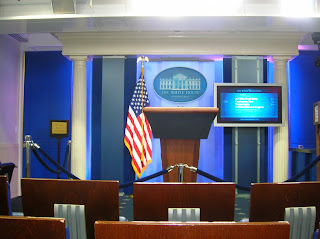 I don't know how realistic my flash forward is, but it did ignite excitement (and, to be honest, a little anxiety) about my future work in Kathmandu. I hope all the pain of language training will prepare me to speak to Nepali audiences somewhat intelligently.
I have no fantasies about standing behind a podium like this in DC sometime in the future. State Department Spokesman is not a title I crave. But that's another blog post.
Posted by Heather at 4:11 AM

I think the new summer haircut and manicure will do so much for your confidence in speaking to the Nepalese press!