Any good diplomat will tell you that getting out of the capital is the best way to gain a fresh perspective on the country in which you’re serving. In many ways, Nepal feels like two separate nations – Kathmandu and the rest of the country. I’ve been fortunate to have had several opportunities to travel outside of the Kathmandu Valley to meet with local journalists. Most recently, I visited three districts in the central part of Nepal. 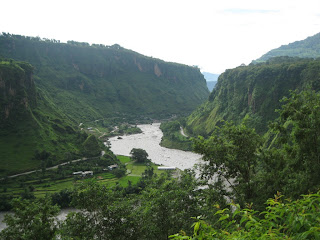 On the road in Nepal

One of the priorities for the Public Affairs section in Kathmandu is the professional development of journalists in Nepal, especially in the remote areas where most working journalists have never received a formal education or training. My first stop was in the small town of Kusma, where 20 female journalists were participating in a week-long training program sponsored by the Embassy. I gave a presentation on the impact of new media on journalism and explained how the Embassy uses social media. The energy from these motivated young women was almost enough to run the projector when the power gave out (a common problem here). 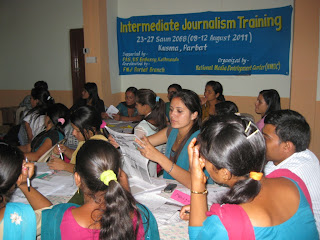 Visiting the training program was just part of the reason for the road trip. The other was to meet with local journalists to understand the press environment in the remote parts of the country. A common complaint is the threat of violence from thugs hired to intimidate and attack journalists who expose corruption or write negative stories about powerful people or businesses. It didn’t take much prodding on my part to get these journalists to share their thoughts on the impunity of criminal gangs and the failure of the local government to protect the press.

A highlight of the trip was a visit to a new radio station in Pokhara that is run by and geared toward children. I was interviewed by a veteran 16 year old girl who posed hard-hitting questions about my childhood and education in the United States. My odd situation as a never-married childless woman of a certain age was another topic of extreme interest! 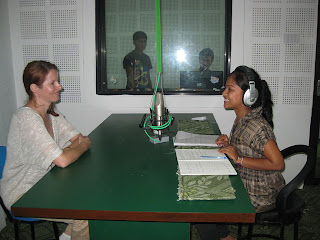 On-air interview with a young reporter from Chhunumunu radio station

One thing I’ve learned from official travel is to leave enough time in the schedule for unexpected things: a dancing demon on the street outside the hotel, a walk across one of the longest pedestrian bridges in Nepal, and an unscheduled stop at an agricultural research center. While these things may not contribute to my knowledge of the status of the press in Nepal, they do help me understand the everyday life of Nepalis. These are experiences you can’t have unless you get out of the capital and get out of the car once in a while.

A colorful dancer on the street in Kusma 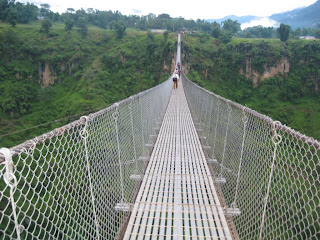 Hundreds of Nepalis cross this bridge every day 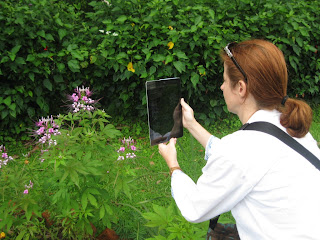 I would love to hear your answers about growing up and going to school in America.