I've been on home leave for a week now. But I still can't seem to relax and unwind. What does that say about me? Maybe my subconscious mind is desperately trying to make lists of things to do. But what is there to do when you're on home leave? Eat sushi. Check. Go to the mall. Check (twice). Read. Check. Attend nephew's little league baseball game. Check. Practice Arabic. Check. Catch up on new episodes of Lost. Check. Make plans with friends. Check.

I think part of the mental confusion has to do with being homeless. The innocent question, "where are you from?" leaves me tongue-tied. "I'm formerly from the Bay Area." "My family lives in Los Angeles." "I spent the last 2 years living in Bucharest." Any of these responses is accurate, but none adequately describes my unusual situation. I'm a homebody without a home.

Don't get me wrong, I'm very happy to be back in America (and to be able to eat an In-n-Out cheeseburger whenever the urge strikes). But along with the excitement I feel of being back in the States, there's an odd, indefinable sensation. It's almost like I'm not even a guest in my hometown, but I'm merely an observer.

Perhaps I'm being too philosophical about this. The "odd sensation" is probably indigestion and will pass just as soon as my body gets used to the suburban Los Angeles tap water.
Posted by Heather at 5:00 PM 3 comments:

My apartment is empty. Seriously, I can hear the echo of the "clickity click" while I'm typing this. The term "pack out" sends chills through the soul of many foreign service officers; the only thing that frightens us more is "check out."

The packers came Tuesday and I have to say it was the smoothest packing experience I've had in the FS (I know this is only my first post, but I've had more than the average number of moves for a junior officer). The toughest part was choosing which clothes to take with me on the plane to California, which stuff to send in UAB (that's unaccompanied air baggage for the uninformed) to meet me in D.C., and which stuff to put into storage until God-knows-when.

Then there was check out. I think they should include a "check out" exercise as part of the Foreign Service oral exam. This would weed out the weak. Give each examinee the adminsitrave check out check list and see if they can successfully obtain all the required signatures in order to receive their plane ticket from the Management Officer. Examinees who break into tears at the feet of the GSO are automatically disqualified. Check out is just like a scavenger hunt, only not as fun.

But in the end (literally, 5:00 on Friday afternoon) I got my plane ticket. So now I'm sitting in my empty apartment, killing time. I'm living out of the lovely Welcome Kit (the t.v. they gave me doesn't work) counting the hours until I get on my flight. See you on the flip side!
Posted by Heather at 10:53 PM 2 comments:

The NATO Summit in Bucharest ended yesterday. Last night is the first good night's sleep I've had in over a week. My role was site officer at the airport in Constanta where President Bush met Romanian President Basescu at his seaside villa in Neptun (no, that's not a code name, it's the actual name of the resort town where the presidential compound is located). The presidents would arrive at the airport separately by plane, and after a welcome ceremony they would get into their respective motorcades and drive to the villa. There, they would have a bilateral meeting with staff, a working lunch, then the two presidents would take a short stroll before holding a press conference. Both motorcades would return to the airport, the presidents would pose with Romanian and American troops stationed there, then depart to Bucharest. Sounds relatively simple, doesn't it? 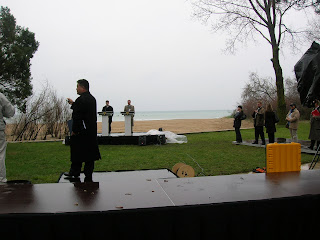 President Bush would be in Constanta/Neptun for roughly 4 hours. But the preparations for this brief trip began over a week in advance. Without going in to details, White House advance teams had to coordinate every single step with our Secret Service, Romanian protective services, and President Basescu's protocol people. There were numerous walk-thrus at the villa and at the airport. (Above, setting up the press conference site at the villa the day before the event, it was cold and rainy!)

Part of my job was to help coordinate the welcome ceremony at the airport. Upon arrival of Air Force 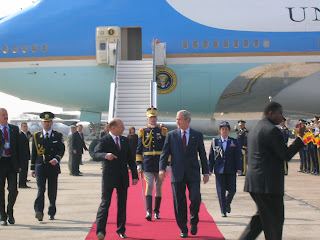 One, I also had to escort staff and support personnel to the correct vehicles in the motorcade. These folks know the drill, so that happended quickly. So I had enough time to position myself at the end of the red carpet and watch the welcome ceremony proceed pretty much according to plan.

After the 2 motorcades departed the airport for the villa, I handed out gifts to the offical greeters. The prefect of Constanta was so excited about his White House cufflinks. I saw him on the news later that night showing them off to a reporter.

With a couple of hours to kill, I hung out at the airport (note: standing on a cement tarmac in heels for several hours will *destroy* your feet). A friend of mine who is the Air Force attache at 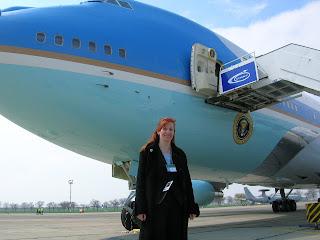 the embassy called me and hooked me up with the co-pilot of Air Force One, who gave me a private tour! Very, very cool. The various areas of the plane are very comfortable and spatious (for an airplane), but not luxurious. It's not like traveling on the QE2. With presidential M&Ms and Air Force One matchbooks in hand, it was time to grab some lunch and get ready for the president's return from the villa and departure to Bucharest.

The departure plan was simplier than the arrival ceremony. All I had to do was position the honor guard along the red carpet and arrange the Romanian and American troops alongside the plane for the photo with the 2 presidents. Who knew that my high school job as a photographer at JC Penney's portrait studio would be helpful in my foreign service career! The presidents posed with the troops, chatted a bit, then boarded their respective planes and left. Piece of cake.

At times it seemed silly that so many people were spending so much time and energy to prepare for such a brief visit. Embassy staff, White House advance teams, communication technicians, and secret service agents all started arriving in Neptun a week in advance. But the reality is that the president needs to be able to run the country from wherever he is at any given moment. And his every move and the movements of those around him (i.e. the press) also need to be carefully choreographed and staged. It was an eye-opening experience. We were fortunate that the teams we worked with were very professional and competent. It was a good group of people.

Back in Bucharest the following day, I had foolishly agreed to work the night shift in the Control 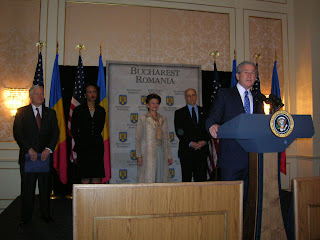 Room at the Marriott Hotel (where the U.S. delegation was staying). It was a little surprising how much activity there was at 2:30 in the morning. But things died down after 3:00. That morning was the embassy "meet-n-greet," where the president and Secretaries Rice & Gates were introduced to the embassy staff and took a few pictures. Having boldly claimed a spot up front, I got to shake their hands and say hello.

Overall, it was quite an experience. And a great way to end my assignment in Bucharest. Now that the Summit is over, I can focus on packing and checking out. My departure date is April 14 and I cannot wait to get home!
Posted by Heather at 11:51 PM 3 comments: