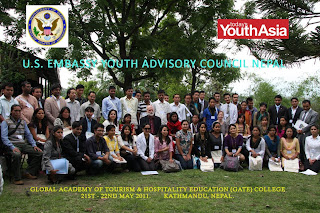 Nepal is an extremely young country. Nearly 3/4 of the population is under 35, but the youth have never raised their voices. Until now. And I'd like to think I have a little something to do with that.

Youth outreach is a hot concept at the State Department these days. Fortunately, in a country like Nepal, where the median age is 21, focusing on youth outreach makes sense (one of the rare occasions when I can use "State Department" and "sense" in connecting sentences). Last weekend the embassy launched the Ambassador's Youth Advisory Council. We gathered together nearly 50 Nepalis between the ages of 18-32 from all regions of Nepal, from different socio-economic backgrounds and professions, and from diverse castes, social groups and religions for a 2-day conference in Kathmandu. I've been working on this project for months.
After years of violent conflict and more years of political incompetence, it's no wonder that young Nepalis are frustrated and cynical about the state of their country and their own future prospects. But the youth we gathered were bright, enthusiastic, and eager to change Nepal by starting with themselves and their communities. It was a very successful event. Taxpayers will be interested to know that this event, and the planned follow-up activities, cost relatively little money. I stuck with the premise of "Keep it simple, stupid!"
Coincidentally we're starting to see young Nepalis rise up in society. A new Facebook group, Nepal Unites, has successfully organized peaceful rallies to call on the government to get its act together. I had lunch with one of the founders of Nepal Unites this week and was encouraged by his optimism, but also his realism. It's a marathon, not a sprint.
I'm glad we're able to support the youth of Nepal in our own way. I think the Youth Advisory Council is a nice example of the kind of work we do overseas that really makes a difference.
Posted by Heather at 2:52 AM 1 comment:

How to Earn Hardship Pay

It's not the kind of thing I normally discuss in detail with friends and family, but it's a common conversation in undeveloped countries. It's inevitable, no matter how careful you are. To put it politely - food poisoning, South Asian style. A colleague recently experienced her first bout and we compared notes. Warning: the following is kinda gross.

I've had it twice in my first 6 months in Nepal. I've never been so sick in my life. A few things that make the South Asian version so special:

It's violent. Honestly, I expected to see my stomach fly out of my mouth.

Unlike normal food poisoning or the flu, I didn't feel better after throwing up. I still felt like crap.

It comes out both ends. My colleague calls it "dual action." Running to the bathroom, I had to pause to make a decision - which end to accommodate first? I ended up sitting on the toilet with the trash can between my knees.

My colleague has made a few lifestyle adjustments as a result of her first bout of South Asian food poisoning. She's learned to line her wicker wastepaper basket with a plastic bag. And she now keeps a hair rubber band within arm's reach of the toilet.

We definitely earned our hardship pay!