Sightseeing in the Green Zone

Embassy Baghdad is a 7 day a week embassy. Even when we do get some down time, there aren't that many things to do. So when the rare occassion arose when I and a couple friends all had a free morning, we went for a drive around the Green Zone and hit a few of the "tourist" attractions. 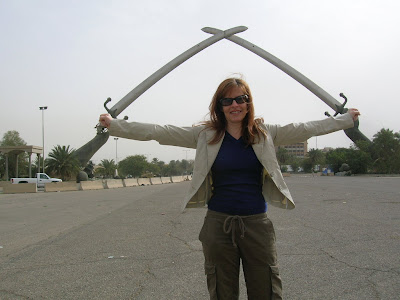 The crossed swords is a must-do photo op. There is a pair of giant "Saddam hands" holding swords at either end of the parade grounds. At the base of the hands, helmets obtained from captured or killed Iranian soldiers during the Iran-Iraq war are embedded in the cement. 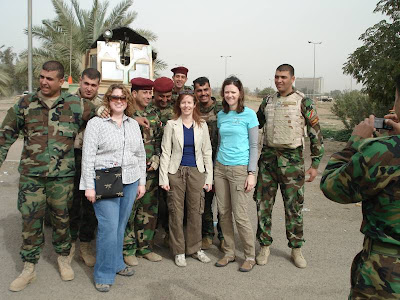 The parade grounds are also a staging area for joint U.S.-Iraqi military exercises. As we left the crossed swords, we passed by a group of Iraqi soldiers who were happy to pose for pictures with us. I've never seen a dozen camera phones appear out of nowhere so quickly. It was a lot of fun and, as a staff assistant, just about the most interaction I've had with Iraqis. 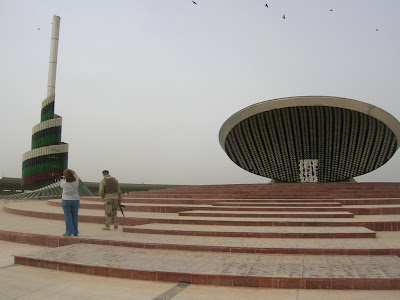 Next stop was the Tomb of the Unknown Soldier. A very large clam shell shaped monument, that, apparently, has a tomb somewhere beneath it. It was a pleasant change to be a tourist for a couple hours.
As we walked back to the car, one friend snapped us back to reality by reminding us to "check the car for sticky bombs." We didn't find any.
Posted by Heather at 9:01 PM 2 comments: