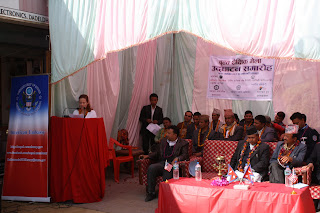 The Embassy's Road Show program in western Nepal may be remembered as the all-time professional highlight of my time in Nepal. We donated over 10,000 English language books and materials to schools and libraries in three towns. Over 20,000 students came to the book exhibition and several thousand participated in the various programs. During the opening ceremony, I gave a speech in Nepali (my first time). I'm sure this was extremely amusing to the local Nepalis.


We held movie and documentary screenings, gave presentations on Volunteerism in America, and offered advising sessions on studying in the USA. My favorite program was an American culture contest; students who correctly identified pictures of American presidents, cities, landmarks, and famous personalities won English pocket dictionaries. 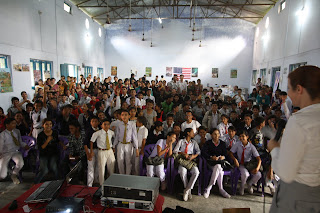 As much fun as the contests were, I think I most enjoyed the informal conversations I had with many of the students. I shared some music from my iPad (Zac Brown Band and Sugarland) and they shared some Nepali music on their cell phones. A couple teenagers brought me some Nepali snacks that I had never tried. 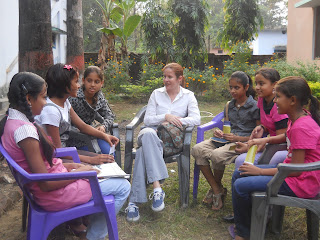 It really was a public diplomacy grand slam. I had a lot of fun interacting with the students and I think that came across to them. Once word got out about the Road Show, teachers from schools that had not been invited showed up and asked if they could bring their students, even as hundreds of invited students were waiting in line to enter the book expo. 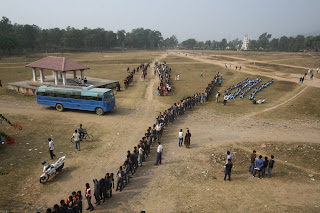 I haven't had a chance to respond to Mr. Perry's attack on diplomats until now; I've been a little busy traveling around western Nepal advancing the embassy's goals and promoting American values. I also haven't had a hot shower or a good night's sleep in a week. In whose interest am I doing all this, I wonder?
Posted by Heather at 4:37 AM No comments:

I was Skyping my parents and talking about going home for the holidays. As always, arranging a flight is a pain in the butt. If I want to get home in time for Christmas Eve dinner, I need to leave Kathmandu now because of all the layovers. My dad logically pointed out that there is a direct flight from Bangkok. But, I responded, it's not an American carrier. My dad logically pointed out that taking that direct flight would not only significantly reduce my travel time, but it would also cut the cost of the ticket in half and save the State Department $2000. My dad is a computer programmer and lives in a world where logic rules. I work for the federal government where logic is futile.
Update: Now my dad is logically suggesting that I just buy my own ticket and have the Department reimburse me. Ah, I remember the days when I was blissfully ignorant of the insane policies of our federal government.
Posted by Heather at 5:48 PM 3 comments: