Sundown at the Palace 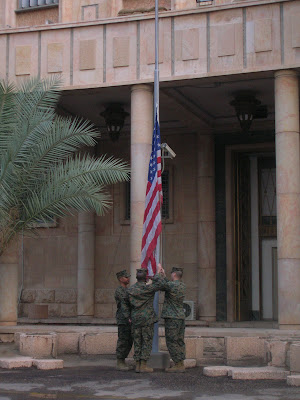 December 31 was the last day the U.S. occupied the Republican Palace, where the Embassy has operated for the last several years. There was a nice ceremony to lower the American flag for the last time. On January 1, the Iraqis will have a flag-raising ceremony at the Palace. (Watch for a battle between the Prime Minister and the President to see who gets the Palace.)

The Marines lowered the flag and presented it to Ambassador Crocker. There had been some lively debate about whether to use the grimey flag that had been flying for a while ("it has character") or to use a new one ("it photographs better"). Grimey won.

The Ambassador gave a nice speech about the transition and the evolving relationship with Iraq. Then he presented the flag to a surprised General Perkins, who, years earlier as Colonel Perkins, played an important role in the first weeks of the war. 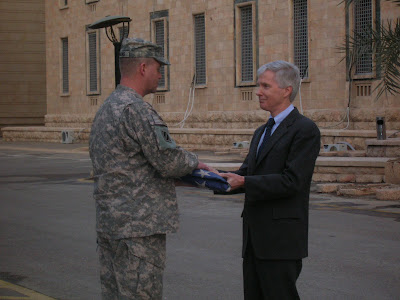 The recently signed agreement between the United States and the Government of Iraq has taken up a lot of the Embassy’s attention for many months now. What is commonly referred to as the Status of Forces Agreement (SOFA), actually evolved into 2 documents – the Security Agreement, which covers primarily military issues, and the Strategic Framework Agreement, which focuses on political and economic projects.

The lead negotiator for the U.S. was Ambassador David Satterfield. Whenever he would come to Baghdad, the only place in the front office where we could put him was at a small desk next to the scanner, which happened to be right next to me. I got to hear some fascinating conversations and at times got an almost insider look at how the negotiations were going. It was like watching a great play from stage left.

It was amusing to see this side of things and also to see what the press would report. There would be days when Ambassador Satterfield was clearly frustrated, either with the Iraqis or with the Americans. Then there would be days when he was very pleased with the day’s progress. I remember one day when he spent much of the time talking with his Iraqi counterpart on the phone and was very happy with how things were progressing. The next day I read U.S. press reports predicting the catastrophic failure of the agreement and that the negotiations were on the brink of collapse.

To be fair, some Iraqi politicians manipulated the press terribly for their own reasons. But it seemed like the press was a willing victim, happy to report as fact any crumb of information they could get without bothering to challenge the motivation of the person who provided it. I’m not trying to sound like a Pollyanna, there were some tough moments, but I think at some point everyone realized that not signing an agreement would be a disaster.

A lot of sweat went into these negotiations and I think my colleagues who worked so hard on it were proud of what they accomplished. Certainly this is the first agreement of this scope the U.S. has ever done. Too bad all the hard work was so quickly overshadowed by one childish act involving shoes. While many people will want to hail the journalist who insulted the President of the United States (like him or not, he is OUR president), his actions, unfortunately, reflected badly on Iraq. President Bush spent the rest of the evening trying to persuade Prime Minister Maliki not to commit hari kari out of embarrassment and to not expel all the journalists associated with that Egyptian newspaper. Take a moment to consider what the Arab reaction would be if an American journalist threw his shoes at PM Maliki during a speech in Washington D.C.

I don’t normally get into policy, but I thought this unique experience was worth bending my own rule. The agreement was passed by the Iraqi Parliament and signed, Ambassador Satterfield went home, and the work goes on.
Posted by Heather at 11:06 AM 3 comments: