A few weeks ago I contacted the diplomatic pouch center in Dulles to find out what happened to a CVS package that hadn't arrived. Unsatisfied with the skin care products available in Kathmandu, I was eager to get my Aveeno products. Dulles responded that they returned the package because it exceeded the amount of liquids allowed by God (aka the FAM).
I calculated the total number of ounces of face wash, lotions, and eye cream and determined that it was about 10 oz. The FAM allows up to 16 oz. Ten ounces is less than sixteen ounces. Unless they were counting the bottle of Excedrin gel tabs as liquid. I explained this to the pouch trolls at Dulles, but they ignored me.
My mother was kind enough to purchase the desired Aveeno products and ship them to me. Concerned that the pouch trolls might, once again, return the package, she included a letter in the box. It read, in part:
"I hope that once you've inspected the products you will permit this shipment to go to Heather as she has discovered that the skin care products in Nepal are less than satisfactory. I have left the items in their original packaging and sealed the box quite securely. I hope everything is in order. I appreciate your vigilance in keeping our people abroad safe from harm but please, once you have verified the safety of this package, permit it to go to Heather. She gets cranky when her skin-care regimen is interrupted."
I'm pleased to say the package arrived safely.
Posted by Heather at 5:34 AM 3 comments:

I’m often asked why I used my Baghdad bidding advantage to go to Nepal. Kathmandu is not exactly London or Paris. Now I have a tangible response. Trekking. 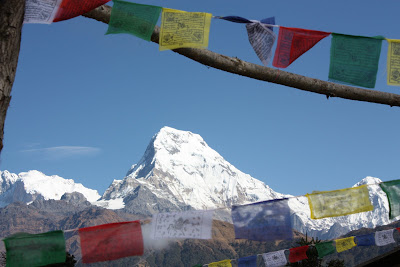 I did my first trek last week. It was a 5 day trek in the Annapurna range. This is why I came to Nepal! It was wonderful to be outdoors in such beautiful country. But it wasn’t without some effort. A lot of effort, in fact.

The first day was meant to be a short, relatively easy day. An hour drive from Pokhara, I, along with a trekking partner, a guide, and a porter started the trek in Nayapul. After a few hours of fairly easy hiking, we stopped for lunch. So far so good. Because we got a pretty early start, we decided to move beyond where the itinerary said we should stay the night. So we forged on to get a head start on the 500 meters of uphill steps. 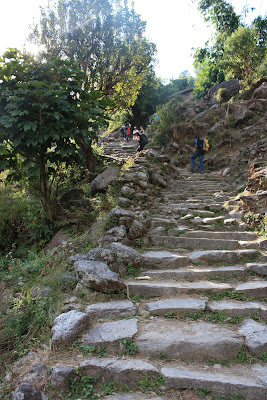 Strangely, we climbed up steps for 45 minutes before we even reached the “real” steps. The key to going uphill is to go slowly. Still, it’s tiring. I said that I thought Binod, our 18 year old porter, looked tired. (This was a lie. In fact, Binod looked perfectly fine.) Being the compassionate person I am, I insisted that we stop for a few minutes to let Binod rest.

Up, up, and more up. My first lesson of trekking in Nepal is that when you think you’ve reached the top, there’s always more uphill. We finally reached the tea house and enjoyed tea on the patio overlooking the steps we had just conquered. After dinner, a group of Austrians staying in the same tea house taught the Nepali porters how to play Uno. “Now you must say ‘Uno!’” Very entertaining.

The second day of trekking started out well. I felt strong, which was good because the entire day was spent going up more steps. The Nepalis seemed impressed with my language ability. I passed an old woman on the trail and I said, “Namaste, didi” (hello, big sister). She laughed this wonderful laugh and answered, “Namaste, bahini” (hello, little sister).

We arrived in Ghorepani in the early afternoon and the Annapurna peaks were peeking through the clouds. It was the first time I had seen the snow capped Annapurna range with nothing between me and it, except the foothills (what we would refer to as “mountains” the Nepalis call “hills”).

The third day started early and was painful. We got up before dawn and marched up 500ish steep meters to the top of Poon Hill in order to see the sunrise. My legs were in serious pain, it was dark and cold, and I was not enjoying the hike. Trying to motivate myself up those steps, I told myself how amazing my quads will look when this is over. 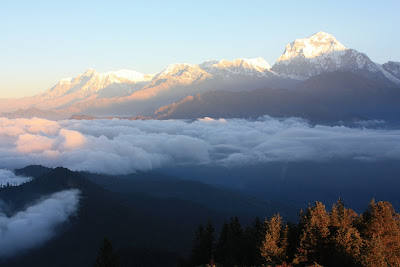 We made it to the top in time to see an amazing sunrise. Worth it.

I had an invigorating breakfast, so I felt really good when we left Ghorepani, even though the first hour was uphill. The fog came in just enough to keep things cool as we descended into the forest. The trail became very rocky and my feet started to hurt as we stopped for lunch. 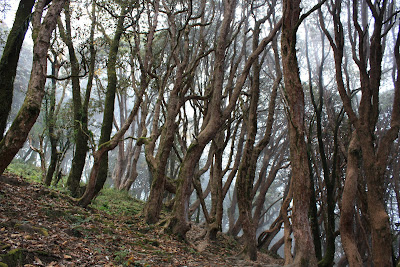 My legs really didn’t want to start again, but I got back into the groove for about an hour. Then my legs and feet really started to hurt. “Binod looks tired.” (He did not.) We rested for a few minutes and trudged on. Just when I thought my legs couldn’t possibly go on… more uphill steps. My moaning and groaning could be heard for miles.

Finally, we stumbled into Tadapani (which means “far water”). I collapsed on the cot but soon realized that my clothes were damp and the coldness was attracted to the dampness, making true rest impossible until I changed into dry (if not clean) clothes. 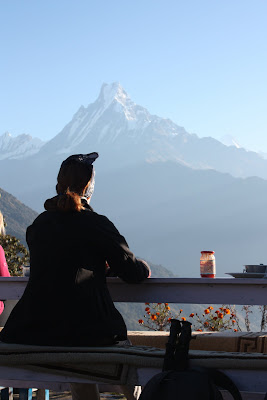 The next morning we enjoyed breakfast outside with a gorgeous view of the Annapurna peaks. My legs were really feeling it after 3 days of steep uphill. But this day’s hike was short and mostly downhill to Ghandruk.

Ghandruk is a lovely village that has managed to balance being attractive to tourists while still being a simple rural Nepali village where people beat rice stalks on well-kept stone patios. I’m pretty sure the cabbage and spinach that were in my lunch were pulled fresh from the cottage’s garden.

Exploring Ghandruk, we saw a sign pointing the way toward a temple. We reached stone steps (of course) that led upwards to an unseen destination. We kept going up and I reached an almost meditative state of mind where the soreness didn’t matter. The temple wasn’t very impressive – just a small concrete structure – but the achievement of getting there was satisfying.

The next morning my legs screamed in protest when I told them to get out of bed. But I got them moving by reminding them of the private attached European style bathroom (a luxurious exception to the shared, smelly hole-in-the-ground bathroom that was typical at the tea houses), which meant I didn’t have to go outside in the cold and I wouldn’t make them squat. We reached a truce. 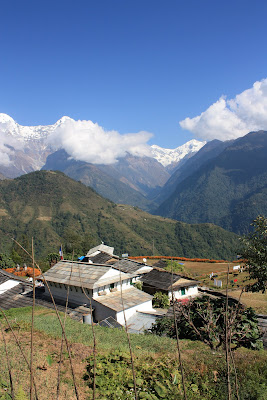 It was hard to leave knowing that it was the last day of the trek. The first hour of the downhill hike was painful, but then the trail evened out. There were many Nepalis on the trail carrying huge loads of hay, firewood, cages of chickens, or posts & tins. Honestly, I don’t know how they do it. I liked the (perceived?) character of the rural Nepali. Life is physically hard, but everyone seems content. Nepalis here smile easily. I told myself that I must try to get out to the rural areas as often as possible.

Looking back on the trek, I didn’t know I had that in me. During the tough parts, not even the “museum quality quads” motivation worked (and my quads don’t look any different, dammit!). But I managed to keep moving forward. I’m not sure I’m inclined to do a hard-cord 14 day trek, but I know I could do a tough 7 day trek and enjoy the experience.