President Obama visited Baghdad on his way home from Turkey. The original itinerary had him arriving in Baghdad in the late afternoon, calling on the Iraqi leaders in the Green Zone and visiting Embassy staff for a "meet-n-greet" before returning to Camp Victory to meet the troops. During the hours leading up to his arrival, everything was going smoothly until shortly after lunch when someone spotted an Arab press report announcing "President Obama in Iraq." All hell broke loose. We scrambled to get everyone up to the conference room and phone calls to lots of important people were placed. A variety of scenarios was considered: cancelling the trip altogether, cancelling the calls on the Iraqi leaders and only doing the airport and the Embassy, keeping the itinerary the same, or only doing Camp Victory. In the end, a brewing sandstorm made the decision easy - the President would land at the airport and meet the troops, but not come into the Green Zone. While the military scambled to accommodate a last-minute press conference and high-level meetings between the President and the Iraqis at Camp Victory, the Embassy scrambled to coordinate the transportation, escort and staging of no fewer than 5 Iraqi leaders (and their motorcades) to Camp Victory with virtually no notice. In the end, the President got his photo op with the troops and his face-to-face meetings with the leaders.

Embassy Baghdad receives Distinguished Visitor (DV) trips every month. This month alone we have three Congressional Delegations (CODELS). Unlike at most Embassies, where such a visit would shut down normal operations for weeks, these visits (with the exception of a presidential visit) rarely register more than a blip. That's mainly because we have a Legislative Affairs staff that coordinates the logistics of these trips. So the only extra work for me when a DV or CODEL comes to town is a little more paperwork.

Kudos to Representative Joe Wilson of South Carolina. When his CODEL arrived in the front office this week to meet with the Charge d'Affaires and the Commanding General, he broke away from the group to say hello and introduce himself to us lowly staffers and thank us for our service. That's never happened before.
Posted by Heather at 9:16 PM 3 comments:

Earlier this week the Brits handed over control of the southern portion of Iraq to the Americans. I accompanied the Charge d'Affaires ("acting Ambassador") down to Basra for the transfer of authority ceremony. The Brits certainly know how to stage a ceremony. A bagpiper led the VIPs to their seats and a military band played and marched for our entertainment. 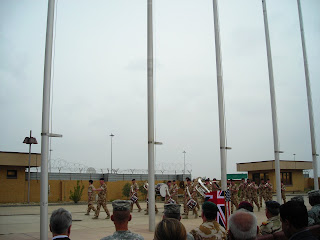 There were speeches by the British military, the U.S. military (General Odierno is speaking in the photo below), and Iraqi military. There were also benedictions by U.S. and British chaplains and a Muslim cleric. The U.S. raised their company flag, the Brits lowered theirs, and the band played all 3 national anthems (the Iraqi women sitting behind me sang their anthem proudly). 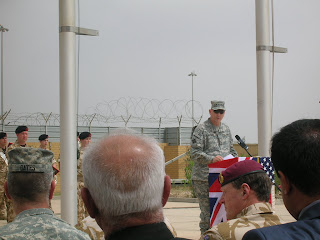 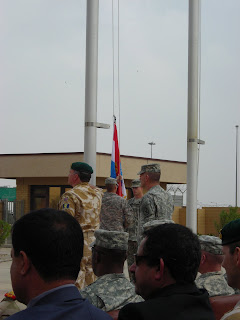 I bumped into a couple representataives from the Romanian army. General Tomescu is the deputy commander of one of the multi-national divisions. He was very excited to hear my "Buna ziua" greeting and we exchanged business cards.
A ride back to Baghdad on the C-130 (I miss the roomier C-17s!) and a helicopter ride from the airport to the Green Zone and I was back in the office by 4:30. Just another day in Iraq. 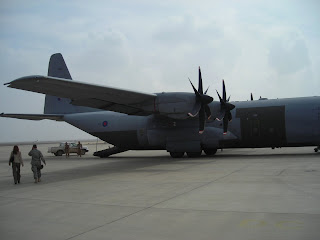